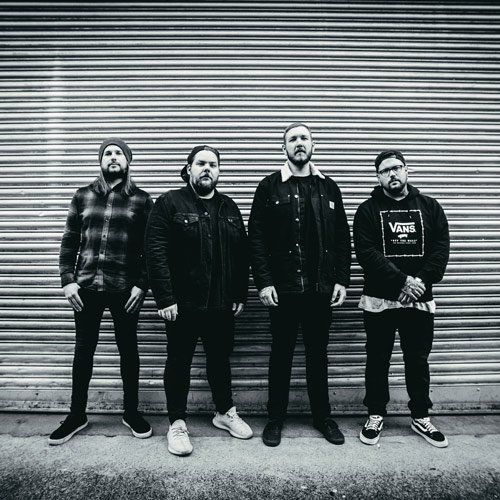 Metal is alive and well for gods sake! It has been around for 50 years and just like anything else that lives, it evolves. So why is everyone just emulating that which has come before? The Modern-Metal-Band TENSIDE can’t answer this question either but what they did do for their 7th studio Album „Glamour & Gloom“ is turn their backs on this „metal by numbers“ approach.

For years TENSIDE have had a fresh, hard-edged and uncompromising sound which resonates with people. Now they have taken it to the next level regarding skill and independence. “We don’t want to be Metalcore“ is the clear statement of frontman Daniel Kuhlemann. “It is important to us to establish and hone our own sound.“ The fact is: „Glamour & Gloom“ is modern and hard and yet it isn’t your typical Metalcore album – and is far from trying to put a modern twist on the same tired tropes. TENSIDE have given Heavy Metal an upgrade and they’ve kicked it hard, to send it right into the 21st century.

Of course TENSIDE have gone through the hard school of metal just like all the other bands – many of whom they have shared stages with, such as: Bad Wolves, Trivium and most recently Killswitch Engage. With „Glamour & Gloom“ the band has sculpted their own distinctive sound that will from now on be recognized as TENSIDE. Hundreds of live shows in boiling underground clubs as well as the biggest Metal Festivals in Europe and Asia have of course added to this. Along with the strongest lineup in the 15 years history of the band TENSIDE’s thundering live sound has for the first time been faithfully captured in the studio. This can also be accredited to producer Christoph von Freydorf (Emil Bulls). “We started working on new songs in October 2018 and in January 2019 we moved the pre-production into a remote cottage close to Saarbrücken where we were able to work on the album without any distractions. Of course there was still some work to do after that and we worked relentlessly on the tracks in the band’s own studio until everyone was fully satisfied.“

Every single song on this album shows just what a slick team TENSIDE has become. Influenced by these times inbetween glamour and gloom, in which we live, TENSIDE is exploring life’s abyss – though they’d never give up without a fight. The sardonic „Cannibals“ with its leaden riffs mirrors society’s indifference, „The Last Anthem“ is a furious, tenacious opening song. „As Above So Below“ is a hymn which embodies rebellion and feeds us thunder. The triumphant song „Along With The Gods“ lets love conquer hate.

„All Black Everything“ is by far the most dire and fierce piece of music that the band has ever written. „I inherited the journal of someone close to me who had committed suicide. This song deals with the thoughts from the journal – no positive outlook, no way out, just darkness.“ A hard pill to swallow. And just as intoxicating. „Darkness shall grow upon the saints and all the blessed“ is one of the song’s lines that bears no hope. Yet this is exactly what „Glamour & Gloom“ is about. We aren’t here for eternity. So let’s waste no time and get on with it.